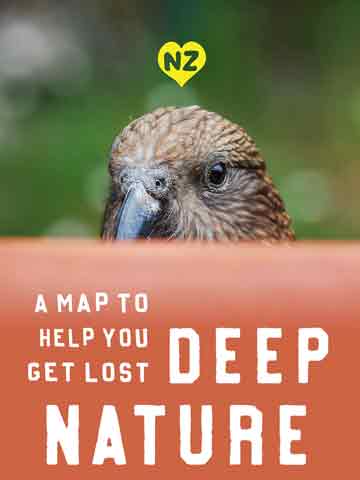 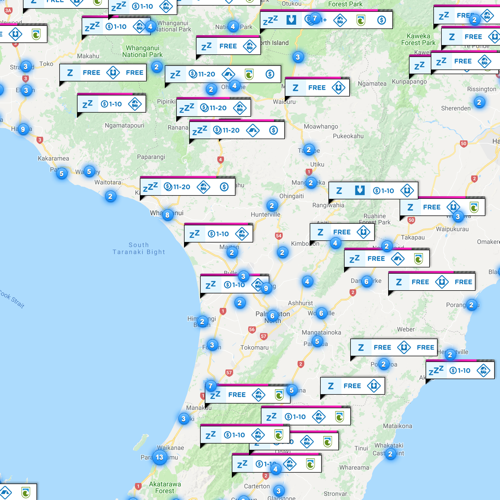 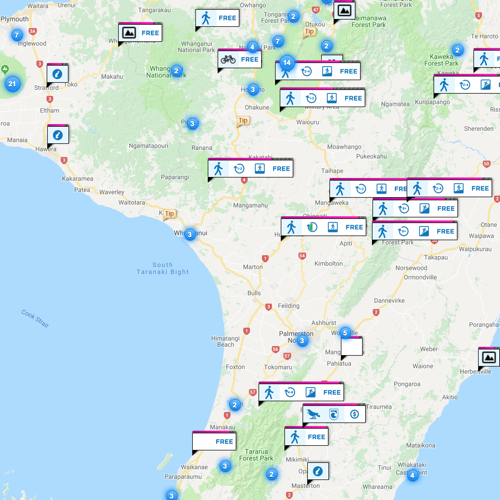 Castlecliff is the main beach for residents of Wanganui and lies at the mouth of the Whanganui River. It is the most southerly beach on the North Island’s west coast that exhibits the characteristic black sand.

Near Mowhanau the cliffs protrude into the sea and are only negotiable when the water level is low. Aim to arrive at Mowhanau around low tide.

Castlecliff is reached from Wanganui by following Heads Road from SH3 near the racetrack in Wanganui. There is a large parking area behind the beach.

Mowhanau is 15 km west of Wanganui. Follow SH3 north for 4.5 km and turn into Rapanui Road. After 9.2 km turn left into Mowhanau Drive, then head left to the beach.

If coming from the west on SH3, follow Maxwell Station Road from Maxwell.

From Castlecliff, head north along the beach. The sands are hard, making an agreeable walking surface. From the northern end of the beach follow the base of the cliffs on firm sand and admire the grey papa rock slumping as it is chiselled away by the sea. The mussel encrusted rocks have slid from the main face to form offshore stacks, with rockeries of smooth stones ornamenting them. Near Mowhanau the cliffs protrude into the sea and are only negotiable when the water level is low. Aim to arrive at Mowhanau around low tide.

The beach at Mowhanau was once known as Kai Iwi, but changed to Mowhanau to avoid confusion with the nearby settlement of Kai Iwi. The beach is an idyllic enclave in the cliffs, which stretch from Castlecliff to near Wainui. Its black sand takes on a purple tinge and occasional shells and pebbles ornament the surface.

Rock pigeons dart in and out of holes in the low cliffs and kingfishers hover above the lagoon’s water. White-faced herons and pied shags perch on the picturesque wooden footbridge, while gannets feed out to sea.

North of Mowhanau, there is also a 20-minute-return walk along the beach. After 5 minutes there is an elaborate footbridge over the Kai Iwi Stream. Follow the path up the hill. On the descent along the road look up at the southern headland and see the remains of the Old Coach Road.

This walk is best attempted one-way, so arrange return transport at Mowhanau.

Castlecliff’s beach is covered with huge quantities of driftwood of all shapes and sizes, derived from the outpouring of the North Island’s second largest river. It is sometimes so choked with driftwood, locals often fill their trailers near the rock wall at the southern end of the beach. The parking areas at the beach periodically become choked with sand, fuelled by the incessant westerly winds. These constantly blow it over the concrete barricades on the seaward side of the parking area, which were constructed to stop the problem. Occasionally bulldozers and diggers clear the parking area, also pushing mounds of driftwood logs to either end of the beach area. This is a perpetual operation.

Kupe made Castlecliff one of his landfalls and named it “Kai-hau-o-Kupe” – the place where Kupe ate nothing but wind. Kupe continued his travels up the Whanganui River.

On 11th January 1871 a Cobb and Co coach service between Wanganui and New Plymouth commenced, driven by Mr Joseph Flynn. The Old Coach Road, which was the only means of communication between Wanganui and northern settlements, passed through Mowhanau. After following the Great North Road to Rapanui, where horses were changed, the coach descended to the beach at Mowhanau and followed the coast to Okehu. A journey to Patea took 8 hours and the journey to New Plymouth usually took two days.

A redoubt was also situated on the southern hills above the beach and was used in the 1860s Land Wars. Alexander’s Redoubt was one of the main fortifications in the area, used to defend Wanganui.

At the mouth of the Mowhanau Stream are the remains of an old World War 2 gun emplacement that used to be stationed on the cliff. It was deliberately pushed off the cliff onto the beach, because excessive erosion threatened the safety of the structure.

Can you contribute? If you've experienced Castlecliff to Mowhanau then please and write a review.