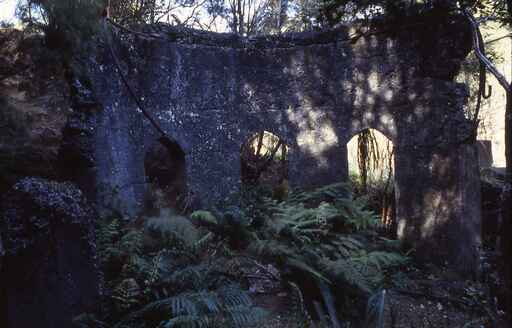 Remains of the Golden Hills Battery

At the battery site you can still see the concrete foundations for the arches that supported the cyanide agitation tanks.

starts from opposite the Pauanui turnoff at the Hikuai service station (19 km south of Tairua and 27 km north of Whangamata). After 1 km, just before crossing the Tairua River, turn left onto Puketui Road. Broken Hills is 6 km along the unsealed road.

The start of the track is signposted from the Bridge Carpark.

Large-scale production from the Golden Hills Mine started in 1908. In 1910, a 20-stamp battery was constructed on the eastern side of the Tairua River. Ore was delivered via an aerial tramway. Because the battery engine was inappropriate for the volume of ore processed, operation ceased in 1913.

Can you contribute? If you've experienced Golden Hills Battery Walk then please and write a review.