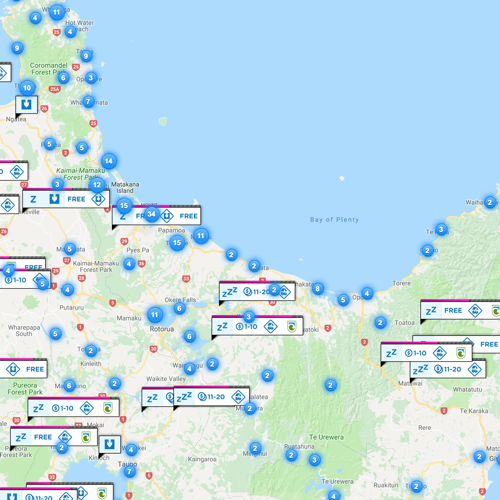 Ananui Falls are hidden deep in the interlocking watersheds of the Upper Kaimai Range. They drop 106m over a hexagonally jointed volcanic bluff into an abyssal chasm they have relentlessly carved.

Continue 6km to the parking bay at the roadend, from where access to the Kaimai Forest Park is signposted.

Follow the fence and Waitengaue Stream to the swingbridge. On the far side, head right at the junction with the Wairoa Track towards the Waitengaue Hut (which burned down in early 2002).

There are two river crossings in the first 25 minutes. Wet feet are unavoidable on both.

(On the return, there is an alternative wet weather track, which can be used if the stream is in flood. It leaves from before the first river crossing (on the outward leg) and finishes after the second. The track is rough but marked with orange rectangles. It is signposted after the second river crossing.)

Follow the old tramway, crossing the narrow shallow stream five times to the site of the Waitengaue Hut (1¼ hours from roadend).

Views of the falls on the ascent are tantalisingly hidden behind the vegetation with only occasional breaks allowing glimpses.

Be careful around the top of the falls, as it can be slippery and it is a long way down.

Logging of the Wairoa Stream catchment commenced in 1901, with the construction of several kauri dams. B.L. Knight was the main contractor, whose operations ceased in 1914.

Between 1939-42, renewed interest in the many logs left abandoned in the stream beds prompted further efforts, which culminated in a drive of nearly 300 logs. The sheer weight of timber broke the booms at the junction with the Waitengaue Stream and the logs floated to Tauranga Harbour. Most were recovered.

Can you contribute? If you've experienced Ananui Falls Track then please and write a review.